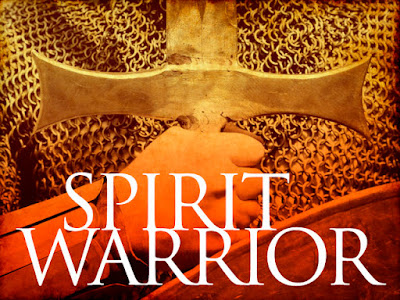 This is a repost from 2010 (of a vision I had in 2002), the reason why I’m sharing again is simple… I want to see people free. The church I get to shepherd (BBCC) is spending a season on Living the Blessed Life and dealing with the curses we may have made false agreements with. We have already seen great work by the Holy Spirit through our small body of believers and we have seen and sensed some pushback by the enemy. So, I sense in my heart that this vision may be of some encouragement for all of us, as we remember who fights for us. God Bless you all, Jay

This vision began this way….

He stood with arms limp at his sides, with every muscle screaming with fatigue. The sting of sweat assaulted his eyes and beaded up like raindrops on the back of his neck. The battle began in a wayward land of deep darkness, devoid of all light. Now, at the battle’s end, the warrior stood in a light that had pierced through the shadows, leaving no trace of its former possessor.

A fiercely fought conflict was rewarded with fallow land recovered and restored to its rightful owner. Long held captives from strongholds were set free and now were heading back towards the safety of the Kingdom. The King personally had trained him and equipped him as well. The piercing words of the King had exposed the deceit of the enemy, allowing for precision strikes against them. Still, it was the King’s authority and Spirit that made the victory possible. Turning his vision towards the horizon, he saw the enemy licking its wounds. The veteran solider of light could sense that it would soon mount another attack. It was one large mass of insult and threat, with the full intent of destroying goodness.

The enemy started its hateful advance, with its fury bent on instilling fear and confusion. Fully aware of the adversary’s strategy, the warrior took a step towards the new battleground. Bone weary and mentally spent he then dropped to his knees. The creatures of destruction at first measured this motion as a sign of weakness and pressed forward. That is, until it was too late.

For the priestly warrior had not made a tactical error as the enemy had supposed, but as he knelt and looked towards heaven, victory was his. The enemy saw not one but a host of warriors on their knees, gleaming with armor of intense light. The warriors moved as one, they spoke as one, and as one under authority they let forth a shout empowered with the spirit of truth. The shout overcame the enemy and scattered their ranks and uprooted their entrenchments. The agents of darkness were called out, dug out and spat out with the overwhelming authority of truth. By faith, a praying band of warriors increased kingdom territory, pleasing the King. One warrior in particular… would sleep well tonight.

Some points from this vision that encourage me:

Those who belong to Father God have a huge promise of victory over the enemy.

“"No weapon that is formed against you will prosper; And every tongue that accuses you in judgment you will condemn. This is the heritage of the servants of the LORD, And their vindication is from Me," declares the LORD. Isaiah 54:17

Have I not commanded you? Be strong and courageous. Do not be frightened, and do not be dismayed, for the Lord your God is with you wherever you go.” Joshua 1:9

“The Lord will cause your enemies who rise against you to be defeated before you. They shall come out against you one way and flee before you seven ways.” Deut. 28:7

Through the Spirit of God we can also recognize who our enemy is and what his tactics are.

“For we are not fighting against flesh-and-blood enemies, but against evil rulers and authorities of the unseen world, against mighty powers in this dark world, and against evil spirits in the heavenly places.” Ephesians 6:12

It is a battle with victory assured.

No, in all these things we are more than conquerors through him who loved us. For I am sure that neither death nor life, nor angels nor rulers, nor things present nor things to come, nor powers, nor height nor depth, nor anything else in all creation, will be able to separate us from the love of God in Christ Jesus our Lord. Romans 8:37-39

You will not need to fight in this battle. Stand firm, hold your position, and see the salvation of the Lord on your behalf, O and .’ Do not be afraid and do not be dismayed. Tomorrow go out against them, and the Lord will be with you. 2 Chronicles 20:17

"For though we live in the world, we do not wage war as the world does. The weapons we fight with are not the weapons of the world. On the contrary, they have divine power to demolish strongholds. We demolish arguments and every pretension that sets itself up against the knowledge of God, and we take captive every thought to make it obedient to Christ." 2 Corinthians 10:3-5

“With all prayer and petition pray at all times in the Spirit, and with this in view, be on the alert with all perseverance and petition for all the saints.” Ephesians 6:18

Will you join me in prayer?


Move me in such a way that I become courageous to fight and to care in ways I didn’t think possible of me. Awaken the spiritual warrior in me to do battle as you see fit, for your glory and for the freedom of many. In Jesus name we pray…Amen
Email Post
Labels: fight Jesus prayer spirit warrior