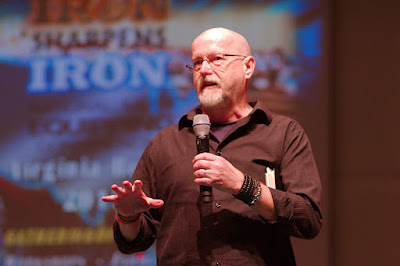 October 14th marked the eight Iron Sharpens Iron Event I've had a privilege to speak at. Hosted by Gathering of Men Ministries in Virginia Beach, the event was attended by over 650 men...brothers who seemed ready for business. In my session (56 guys, that's them above) there was a tremendous awareness of God's presence and His generous love for all of us. I had so much fun with these brothers and left blessed beyond words. There were a few of these men who asked for prayer from busted marriages to deeply wounded hearts...each moment became a God moment as He ministered His grace to their hearts.

This is why I love going to events like ISI, for the opportunity to fight for men's hearts and hopefully encourage them with the truth of who they are in Christ.

1 John 3:1 says this about our identity.

"See what kind of love the Father has given to us, that we should be called children of God; and so we are. The reason why the world does not know us is that it did not know him."

A God Hearted man is a man like Jesus

Jesus was more than some nice guy going around looking to pick up some volunteer work to pad His resume. His humility should not be mistaken for a milk-toast expression of masculinity concerned about not trying to upset anything or anyone.

I see calculated fierceness in our Lord’s focus plan of redemption. His good works campaign was a battle strategy not content to stay on the front line but to embed itself deep behind enemy lines. It was a warrior’s strategy, purposely disruptive and perfectly executed to cause destruction in the enemy’s camp.


In our everyday battle we must remember who fights for us… our Messiah and He is a determined force of goodness. The will and schemes of the enemy fail when confronted by such an overwhelming force.

If you would like to listen to the session, you can here: