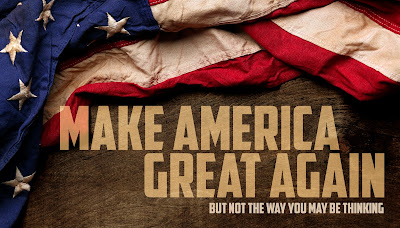 But maybe not the way you're thinking....


Lately I have avoided most political discussions like a man wearing a paper suit avoids people with matches; such interactions get heated quickly and tend to burn someone. The media, which is harder to avoid, feeds the American public with ridiculous amounts of un-journalistic garbage, calling it news. It is no wonder we suffer from the obesity of self-interest and pride when gladly gorges on this political junk food. Then we have the social media world, filled with its own opinionated pyrotechnics, which has frustrated me with post after post of some of the meanest rants I have ever read online.

And those were from Christians… Have we lost our minds?

No man/woman can make great again. No candidate/Democrat/
Republican/congress/judge/army/economic package/3rd party/grass roots movement or revolution can bring greatness back to the shores of the . Only God can make great.

He controls the course of world events; he removes kings and sets up other kings. He gives wisdom to the wise and knowledge to the scholars. Daniel 2:21

And, by the way…It’s His definition of great that counts.

Righteousness exalts a nation, But sin is a disgrace to any people. Proverbs 14:34

If His sons and daughters want to be great again it requires righteousness…in the way we live and in the way we love. It needs repentance and the willingness to turn back from a life that is centered on me. It’s not who I choose as my candidate that guarantees my well-being but who chooses me.

Blessed is the nation whose God is the LORD, the people whom he has chosen as his heritage! Psalm 33:12

Let’s turn the ballot booths into the greatest collection of prayer closets the world has ever seen… praying that God make American His again.