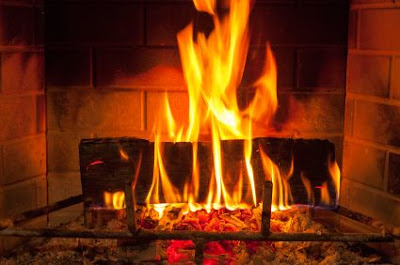 Traditions are grand; they encompass us with a rich blend of history and relationships. However, some can be just downright …well, silly. I did a little research about the Yule Log and found out some interesting facts, which may just surprise you. Before I get into specifics of the Yule Log itself, it seems that most of these legends started in lands where cold and ice rule the landscape for months on end. I’m only suggesting that combined with the long months in darkness, the cold can play a few games with your mind. This for me explains many of the wacky Yule time folklore stories.

From comes the disturbing tale of the giant…Yule Cat. This terrible feline is ready to make meow mix out of any lazy townsfolk, especially those who might have been less than ambitious in helping the town prepare for the long winter. Perhaps they were put in charge of the litter box, (a rather large litter box at that), and lost all motivation, who can blame them? However, slothful citizens in were not alone in their peril; it seems that poor people were also at risk to fall prey to this very picky Yule Cat. For if it found you outside with old clothes on, you were a goner as well! Poorly dressed lazy folk were a high risk target for sure.

This is the real reason all grandmothers give new socks and underwear every Christmas, its anti-Yule Cat protection for their grandkids. After all, no self-respecting Nana is going to risk losing one of her own to some oversized because of old underwear. The Yule Cat legend may also explain why the dog became man’s best friend. A family dog may eat all your food in your house but at least not members of your household.

The Yule Log originates from some ancient Scandinavian festivals and the Vikings did their bit for history by spreading it around through their many raids. Can you imagine Eric the Red saying, “Here you go, we just raided your town and took all your stuff but we left you this Yule Log gig.” I think the modern day equivalent would be the holiday fruitcake, which I believe is flammable and could be used as a Yule log in a pinch, but I digress.

Tradition states that after choosing a large log in the forest, it was decorated with ribbons and carried back to the village. It was customary for anyone meeting the procession on its trip home, to raise his or her hat in respect. Why the log would need such a greeting or honor is beyond me. However, if you wanted an excuse from observing such a custom, you only needed to be a barefoot woman or have flatfeet. A 4F rating that no doubt, kept many a fine young person from serving in the Yule Log burning service corps.

Through the years the legend grew in popularity and changed a bit. It was believed by many to be unlucky to buy a Yule log. The real lucky ones were found on one's own land or from a neighbor's wood. This, for the neighbor trying to find his own Yule log, was not so lucky. People even saved a fragment from the previous year’s log to use to ignite the new one. The homeowner would keep this under the bed to keep the house safe from fire and lightning (and perhaps Yule dust bunnies). Not lighting the log on the first try was a sign of misfortune (watch out for the Yule Cat) and touching it with dirty hands was a sign of disrespect. This early version of the Duraflame log would have to burn unattended for 12 straight hours, but at least you got to eat during this time. Although people were distracted from eating their meal, since you had to carefully study the shadows cast on the wall by the Yule log fire. A “headless” shadow was not good news for the person casting the shadow. A groundhog moment like this one supposedly foretold the death of said person within the year.

Here in we have dispelled the myths of this long ago legend by reducing the Yule log to an appearance online. You don’t have to hunt for one (except maybe for web surfing), there are no wall shadows to worry about while you are chowing down. More importantly, the internet could care less about your flatfeet.

Every Christmas I learn something new and surprising. The memories, the stories and traditions, collectively add to the discovery process I go through each year. It wasn’t always so, but God has faithfully showed me the right attitude to dive into at Christmastime.

It happened this way…

Over 2000 years ago, in a small Hebrew town, something more powerful than tradition rocked the world. Celebrating His birth does more than change the way I “do” Christmas, it transforms the way I am, the “who” I am. Because of that God injection into humanity, all the stories, memories and traditions become richer in our lives. Let’s enjoy the festivities with the focus on a Savior that came to give us so much more.

“Praise be to the Lord, the God of , because he has come and has redeemed his people.” Luke 1:68
Email Post